By adminDecember 22, 2018News
No Comments 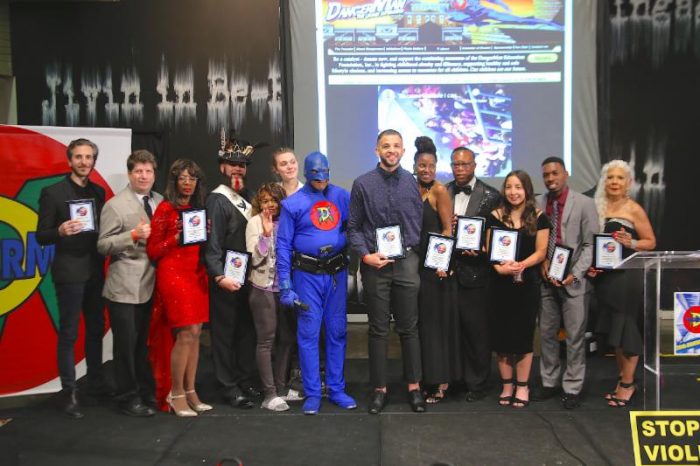 America’s Real Life Urban Superhero, culminated his 20th anniversary with the Third Annual 2018 DangerMan Hero Awards, held recently at California African American Museum (CAAM) in Los Angeles. The momentous occasion acknowledged eight community activists as “DangerMan Heroes” along with California State Senators Holly J. Mitchell and Steven Bradford, with the DangerMan Hero Award for Humanity. The highlight of the evening was the presentation of the DangerMan Hero of the Year award to cancer survivor and amputee, Troy Druppal. The evening was produced by actor, mentor and philanthropist, Roger I. Tinsley, the founder of the DangerMan Urban Superhero brand and CEO/president of the DangerMan Education Foundation, Inc., a non-profit 501(c)(3) organization. Aetna, a leading provider of innovative life and health benefits, products and services, generously sponsored the affair.

All of this year’s recipients received special awards, cash and other gifts presented through the DangerMan Education Foundation, Inc. As the “DangerMan Hero of the Year,” Druppal received an additional cash prize to continue his activism. DangerMan cited Troy Druppal as an astounding young character, who didn’t let a terminal cancer diagnosis or the loss of one arm stop him from pursuing his dreams. A basketball coach, motivational speaker and founder of the Flex Foundation, Druppal epitomizes the traits of a true hero. “We were truly honored to recognize eight outstanding community activists this year as heroes,” notes Tinsley. “Troy’s personal journey however, his perseverance and his current activism positioned him as an outstanding role model. His continued efforts to defy limitations and inspire others make him a true ‘super’ hero!”

Roger Tinsley first introduced DangerMan to America in 1998, after being emotionally impacted by the death of a four-year-old who was tragically killed in gang-related gun fire. He created a real-life superhero who could serve as a role model for school-age children in underserved communities while addressing issues that specifically affected them. Using his own money and resources, DangerMan, the Urban Superhero was born.

As a ‘real life’ urban superhero, DangerMan is an advocate for children’s rights promoting literacy, safety and good health. He wages against bullying and also fights human trafficking. DangerMan visits schools and community events encouraging his audience with a motto of “No gangs, guns, drugs, alcohol or tobacco.” He has traveled throughout America and Haiti, empowering children to live their best life.

Tinsley credits Marvel comic book legend, Stan Lee for a great portion of his inspiration and success and paid tribute to him by presenting the DangerMan Hero Award Spirit of Stan Lee for Literacy to Atticus Baldwin and Spectrum Laboratory (Spec Labs), a nonprofit organization whose mission is to create original works of film and music within the autism and special needs community.

In addition, the twelve victims murdered at the Border Line Bar & Grill in Thousand Oaks, CA and the people who lost their lives and homes in the California wildfires, as well as the first responders, were also acknowledged during the event with a candlelight moment of silence during the evening.